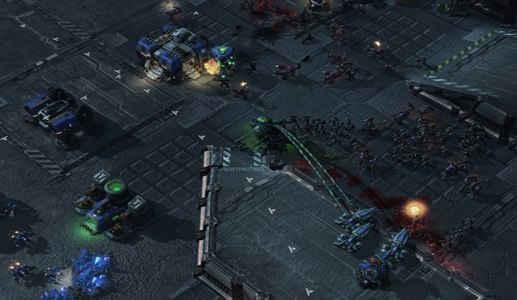 Straight out of Blizzcon comes word that Blizzard will be releasing official mods for StarCraft 2 for all owners of the game to enjoy.  The mods range from a quirky puzzle game, to a Defense of the Ancients mod,  to a cooking ingredient hunting game, to a co-op Left 4 Dead style romp.

The latter is called Left 2 Die and is based on the campaign's Outbreak mission.  This is the mission where the colonists were turned into pseudo-Zerg like creatures and your job was to eradicate them.  In the mod things are flipped as you are tasked with defending a base with another player.

As the waves of the zombie like creatures attack they'll be bolstered by special units.  These units range from a Hunterling which can pounce on units to a creature that vomits on your marines called a Spotter.  Sound familiar?  Blizzard isn't hiding the fact it was inspired by Valve's game at all.

Once you kill one of these special creatures you're given the opportunity to upgrade your technology tree a little bit more as the waves getting harder and harder.

There's no official release date for this mod or any of the other mods, but expect the in the coming months.