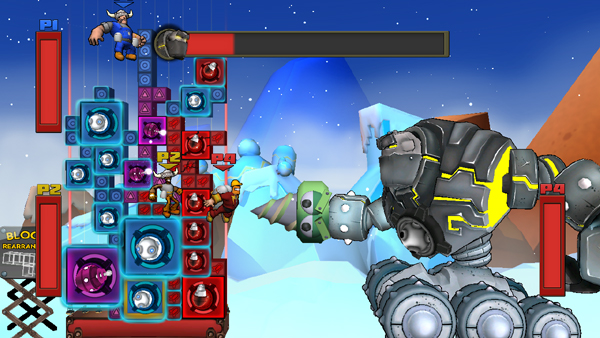 Sometimes, combining different things is good; for instance, Reese's Peanut Butter Cups.  Other times, it's not so good: anyone ever had a pickle/banana sandwich?  Slam Bolt Scrappers is hoping the combination of Tetris-like puzzles and an old school brawler has more in common with the chocolate/peanut butter delight.  Since co-op is another part of the mix, we're hoping its a tasty treat, too.

In the upcoming PSN-only title, up to four players team up to build and bash their way to victory.  Co-op is especially important in boss battles, like that pictured above.  All players coordinate blocks in order to build cannons, then part of the group can go off to engage the boss, while the others make sure the cannon fires at just the right time.  That sounds like a nice cooperative experience to us, and we look forward to Slam Bolt Scrappers' release.  In the meantime, I'm off to try putting brown gravy on vanilla ice cream.  You never know, right?