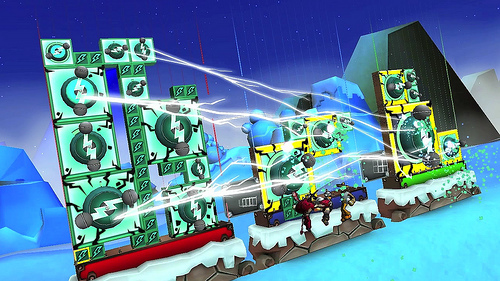 In a somewhat early form of a co-op release alert, we're letting you know that Slam Bolt Scrappers is out March 15th. Why the early notification? It's out right after PAX East, and we'll be bombarding you with news and hands-on previews until the 15th. We're definitely hoping for some hands-on time with this puzzle/tower defense/brawler at PAX East, but if we don't get any, it won't be long before we'll be reviewing it (after March 15. Got that? March 15th).

We're recommending you mark your calendars, and Playstation.blog is making sure you know what you're getting yourself in to by waiting anxiously for the next week to get a hold of Slam Bolt Scrappers.

What is Slam Bolt Scrappers, you say? Thanks to what could only be psychic powers, you already know that it’s a game that combines a beat-em-up feel with building and tower defense. Players control flying heroes that beat up baddies to get colored building blocks. Stacking these blocks into squares of the same color builds weapons. Most battles give players a specific tower that they need to build on – the weapons built on this tower will automatically attack a tower controlled by their opponent. The goal is simple: use your weapons to destroy your opponent’s tower to win. Where does co-op come in to play? In the general strategy tradition (and believe me when I say strategy is key here) the game features multiple players against computer opponents. A comp-stomp co-op if you will.

Players can play with up to 4 towers, and the game is 4 player, so there are plenty of different battles to be had: multiple players can work together to build one tower, battling it out against friends or computer opponents, a single player can control multiple towers, or each player can man their own tower in free for all mode. And it’s really sweet!

So to recap, you'll be playing some comp stomp puzzle brawler action starting March 15th exclusively on Playstation Network. Got that? Good. We'll get you a review as soon as we get back from PAX East, which is in Boston, which is the developer Firehose Game's HQ - We'd better get some hands-on time with this while we're there as well, and we know at least one of you will be at PAX East with us to try out Slam Bolt Scrappers.