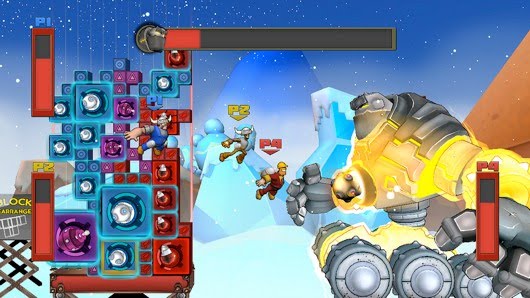 Most of the experiences at PAX are “All right! I finally get to play this game I’ve been hearing about,” but this isn’t the first time we’d seen Slam Bolt Scrappers. Last year an early version of the game was present on the show floor, and Nick and I tried it out. In the last year, the games developer Fire Hose Games has grown by leaps and bounds, and so has Slam Bolt Scrappers.

Aside from acquiring a publisher in Sony, the game experienced a handful of technical upgrades from an already intriguing design. The goal of the game is a beat-em up version of a Tetris-style puzzler. You control a flying character who has the ability to punch and kick flying pig-monsters in order to make them drop “blocks” in various shapes. Depending on the color of the monster destroyed, a blue, purple, green or red block will be dropped. Your character then picks up the block and rotates it to whatever side they need it, and you drop it from wherever you are.

By connecting same-colored blocks, you create turrets of various sizes - the turrets can also grow over time if you add more of the same-colored blocks to the turret. The turrets will then auto-attack your enemies to break down their puzzle tower of turrets. As you are able to beat up the flying pig-monsters, you’re also allowed to wander over to your enemies base to beat up their characters. Or, you get power-ups that really boost your abilities in game, including one that makes you invincible, and one that turned you into a “Green Monster” who is basically a radioactive-steroid-injected version of your character. Lowering a characters health to zero drops them out of the game temporarily, and they have to complete a quick-time-event style respawn in order to come back. Beating up the enemies also makes it so they can’t drop or adjust their bricks, but it will take you away from turret building as well. In order to help your team, you’re required to balance the beat-em up tactics and tower building - having two players helps immensely.

As we’ve reported in the past, Slam Bolt Scrappers is also a co-op title. You’re able to ally-up on the same tower to help each other build up turrets or beat up the enemies - This can be done either through the story mode against A.I. or as a custom match (up to three-versus-one AI).

As I mentioned Slam Bolt Scrappers is cleaned up since the last time I played. The things I noticed were the game speed and fluidity with controls. With the PS3 controller it is simple to rotate blocks and drop them quickly (rotate with either left or right trigger, then drop with O). Moving your character around is a lot more fluid as well, with bright colors that pop out to make sure you don’t lose track of them (with four players it can get a bit crazy, and that was the biggest issue I had last year). The one thing that may either make or break the game for many is the type of co-op available. Slam Bolt Scrappers is a local co-op title only. The reason is somewhat simple - the developers felt they needed to go back to the good old days of couch gaming with your buddies, tossing back a few beers (or sodas if you were in your teens during the N64 Smash Brothers era).

The only mode that was playable on the show floor was the versus mode, but I feel I got a good taste of how the co-op will work when my partner either worked really well, or not well at all. Teamwork (or a general lack thereof) really made or broke Slam Bolt Scrappers when played in multiplayer - so make sure you communicate it up and split punching/turret building duties.

As a reminder, Slam Bolt Scrappers is out today exclusively on the PSN. Go try it out for yourself, or wait for our review for more details on the campaign co-op.