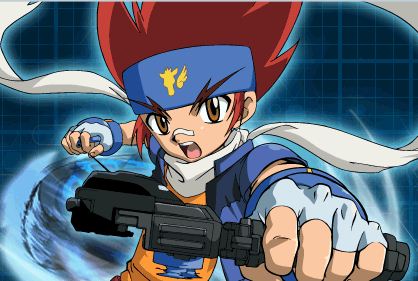 Beyblade: Metal Fusion - Battle Fortress is releasing tomorrow for the Nintendo Wii.  After feverish research I have found that a Beyblade is not, in fact, a mythical blade used to smite movies, endowing them with 100% more explosions but with 1000% less awesome.  That's the Bay-Blade, and that's something entirely different.  Beyblades are "highly powerful spinning tops... which are enchanted with magical spirits."  I'm going to go out on a limb here and say that they just might be Japanese in origin.

After numerous Game Boy and DS titles, this marks the franchise's first foray onto the Wii.  In addition to the single player story, four players can play in competitive or co-operative battles while customizing their blades with "hundreds of different parts."  They can even customize their Beystadium.  (Which, once again, doesn't have any thing to do with explosions or slow motion shots of helicopters.)  Back in my day it was Transformers and G.I.Joe, but if kids want to attack each other with haunted death tops, who am I to judge?

Here's a little more information on the game.

Completely game-specific story with the original characters from the animation

4 player competition against 3 other human or AI controlled enemies

Choose from up to 20 different characters

There is a special edition available which will also have an episode from the show.  Originally just plain old "Beyblade," the animated series has been around since 2000, and a new toy line is accompanying the 2010 season.  It's only be a matter of time before Hollywood spends $500 million on a live action movie.  This 'film' will crush your kids' childhood by turning Storm Pegasus into a yellow Camaro, and then having two sweaty actors make out on top of it.  Happy Holidays!