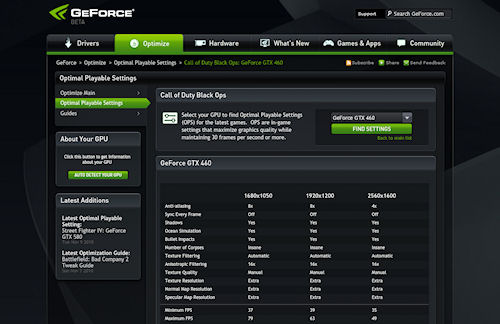 NVidia have just launched a brand new website for their GeForce line of video cards to help you get the most out of your investment in its PC hardware.

The driver section was overhauled and now adds the ability to auto detect your GPU and OS combination and get you the best driver for your configuration.  There's an optimize section that shows you exactly which graphical settings to run at to get the best frame rates.  Obviously it doesn't take other system components into play - but it's at least a good idea of what details you can play Call of Duty: Black Ops and other games at. Other features include guides on game tweaking and overclocking components; and you can also find out what features a game supports - like 3D, SLI, DirectX 11 and others.

Is all of this Greek to you?  Don't worry - Co-Optimus is putting together a very special PC feature in the coming weeks, so keep an eye on the site!