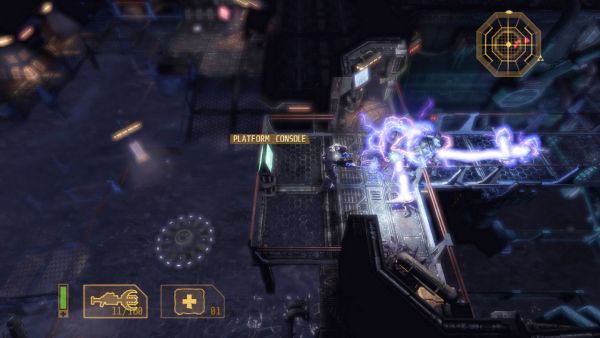 It seems like only 51 yesterdays ago that Alien Breed 2: Assault came out.  The third and final chapter in this epic alien twin-stick-shooter will be hitting the Xbox LIVE Arcade and PC next week on November 17th.  Alien Breed 3: Descent continues the story of Theodore Conrad and his embattled space ship, the Leopold.

We thought the last Alien Breed game was flawed, but enjoyable.  This go 'round finds Conrad descending to an ice planet to battle the baddies.  New weapons and enemies abound.  There isn't much news about co-op, other than it is included.  Look for more survivor modes and co-op specific missions.  The game should have a better variety of environments than its predecessors.

For the first time Conrad can venture outside of the ship in the breathtaking hull walk set pieces, and for those trigger-happy shooter fans there are vicious new enemies to fight, including the Electro-Shocker alien and the awe-inspiring final bosses. New armaments are also available in Descent, with the Electro-Link gun allowing for shockingly good crowd control whilst the formidable Project X weapon will tear through anything in its path.

Note that the trailer mentions a PlayStation Network release, though there is no specific date, as of yet.  Look for Alien Breed 3: Descent on XBLA for 800 Microsoft Points or on Steam for $9.99.