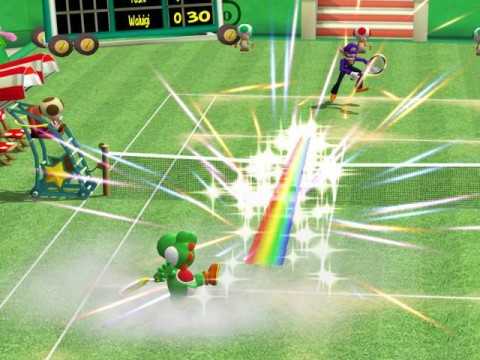 Some people cannot stand casual games, while other people only play casual games. Many hardcore gamers don't like the casual games because they believe the casual games could spell doom for hardcore games. However, I tend to disagree. I am a hardcore gamer, but I've been on a several month old casual game love-fest. The fact is that as a busy college student, they are the only way that I can co-op with my buddies. That's why this week, continuing the Mario trend begun last week, I played Mario Power Tennis.

I didn't know that my roommate apparently had a boatload of co-op games, and when I saw Mario Power Tennis alongside some other great co-op games, my eyes lit up. Back in my N64 days, Mario Tennis owned my soul. So, I kindly asked if my roommate wanted to play some tennis, and we swung away.

Mario Power Tennis is really not a massive departure from regular tennis, at least not on the normal courts. The only real difference is also what makes it more fun than regular tennis: power-ups. The Mario series of sport/racing games has really nailed the idea of "basic gameplay of said game, plus power-ups, equals fun." Mario Power Tennis is no different. It's basically tennis with superpower, but that works for me. The said superpowers differ for each character, and the power-ups are related to the character (like Luigi who uses a vacuum to pull the ball towards him). Also, each character has one defensive power-up and one offensive power-up, and they are used accordingly. So, it seems kind of simple, right? Well, playing doubles in Mario Power Tennis proves otherwise.

This isn't to say that my buddy and I struggled, or the game was overly complex. It's just that Mario Power Tennis actually has some depth, particularly in the doubles category. This is partly because of the power-ups, which sort of make a rock-paper-scissors situation. For example, our opponents would use an offensive power-up, so we'd counter with one of our defensive ones. However, you don't always have to use your own power-ups to block other power-ups, but they are the only surefire way. Thankfully, the game is not all "power-up, power-up, power-up." There really is a lot of tennis gameplay in the game.

You can loft the ball, you can spike it, and you can do somewhere in the middle. The co-op aspect of doubles tennis also makes you think a bit, since you both cannot be in the same general area, otherwise there are gaping holes for your opponents to hit into. My teammate and I stuck with the front/back setup, and this worked pretty well. So, after all this discussion about gameplay mechanics and whatnot, you are probably asking yourself a question. Namely, did we have fun? Of course.

The game's difficulty levels are balanced really well, so my teammate and I actually got a bit of a workout against our opponents. Granted my teammate is a great Mario Tennis player, but the AI was surprisingly alert and responsive, often making very human-like moves. If we'd get bunched up, they'd hit it far away from us, and they generally used power-ups effectively. This lead to some epic counters by my teammate and myself, including a power-up save from a ball that was almost in  the stands. We had plenty of fun, but the biggest emotion we felt was accomplishment. It was, to a limited degree, like we actually were playing tennis.

All in all, though, the game served the exact purpose of casual games: to divert you and help you relax for a bit. We both had a lot going on with classes and whatnot, and Mario Power Tennis was a nice diversion. We got to feel like tennis pros, while still playing as Mario and slamming the ball into our opponents with a hammer. It was really fun, and it didn't take up too much of our time. Plus, almost any sport, plus Mario, equals fun.