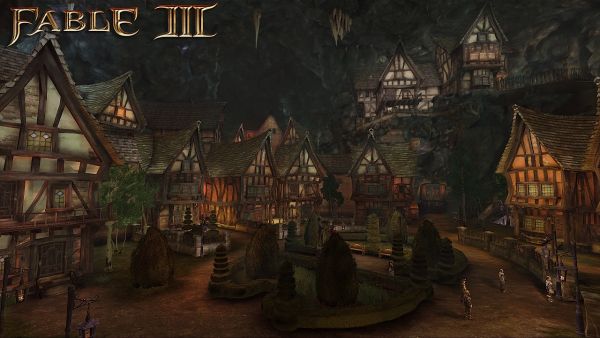 Not long after the Xbox 360 release of Fable 3, we’re already being granted new DLC. This DLC pack covers a new area under the city of Bowerstone (called Understone), two new mini-games, and a whole slew of new weapons. We gave this DLC pack a go in (local) co-op and are here to share those impressions.

The Understone Quest Pack comes wrapped up with a few fun little things to do for all kinds of people, but I will say it’s probably far more interesting before you’ve completed the game. When you fire up this DLC, three quests will flash on your quest log at the top of the screen. The first directs you to the Bowerstone industrial district where a man is complaining about hearing a voice in his factory. Concerned about something haunting his factory, he asks you to go uncover the mystery and take care of the issue. As you advance through the area below his factory, you hear a somewhat mechanized voice warning you to turn back. The cave system that you’re traveling through eventually leads to a town that no one knew about. Here is where you meet your one and only additional moral-choice. I won’t spoil it for you, but it’s an interesting addition to the main storyline (and the subsequent quest for gold).

After this quest is done, you can bum around town to meet some of the (very weird) inhabitants in their sheltered setting. Or, you could follow the second quest log option. This one will send you back to Reaver’s mansion where you can play the Wheel of Misfortune game for a high-score. In co-op, this score goes up increasingly fast, promising a double weapon prize. I was unable to play with an additional hero, so I’m not sure if both characters get the prize - my couch co-op henchmen sister was gifted with, well, me having stronger weapons? I didn’t notice her getting much of anything. Finally, the mercenaries camp calls for you. They are a peaceful folk now that Sakar is gone, and the new leader is ready to open up a trader outpost instead of murdering traders on the road. He’s got a bunch of new shops for you, but most interestingly is the bandits marksmanship game. Here you’ll use whichever ranged weapon you’re carrying to take out wooden targets. In co-op, this game is playable by both characters for added score. Again, I didn’t notice any reward to the henchman second player.

If you’re one for collecting weapons in the Fable 3 world, though - this is the game for you. Two free weapons just for downloading the pack (gifted to you in your sanctuary), two weapons for rocking the Wheel of Misfortune, and two more for the Shooting Range marksmanship challenge. Those weapons are:

The range gives out the Money Shot and Black Dragon weapons prizes, while the wheel gives the Dirty Harriet and Dead Ned's Revolver. The pack also includes the Marksman 500 and the Full Monty weapons as gifts in the Sanctuary. (Via 1Up.com)

($5) is about right for this type of pack. One new area (sadly still missing the Fable classics such as Oakvale), and a few minigames is fun enough but certainly not worth much more out of your pocket. With a higher level characters these minigames are also somewhat boring as the challenge is lost, especially the Wheel of Misfortune (You are virtually guaranteed to get the weapons on your first try if you've completed the main story). Once you get the weapon prize for doing outstanding in your score, there isn’t really much reason go to back and play them again.