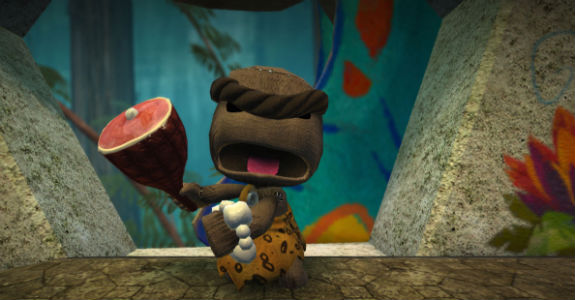 The Sony Playstation has really enjoyed the success of Media Molecules Little Big Planet since its initial release. So much so that the new Playstation Move is getting a new downloadable segment called Sackboy's Prehistoric Moves, only it takes the idea of friendly co-op one step further by requiring co-op to work.

Sound weird to you? Though we love a bit of co-op, it sounds weird to us too. Here's what Kotaku got out of the press release.

A LittleBigPlanet spin-off called Sackboy's Prehistoric Moves will be out this December for download to the PlayStation 3. It's multiplayer-only, requires a Move controller...
Sony's PlayStation blog shares the details of what essentially is a 10-level co-op mission pack set in prehistoric times and full of dinosaurs.
Up to four players will control versions of LBP hero Sackboy using standard PS3 controllers. The other will use a PlayStation Move wand to flick switches and trigger platforms to aid each Sackboy along.

The article also mentions up to five Sackboys playing together in Sackboy's Prehistoric Moves, four on original PS3 DualShock controllers and one with the Move lolipop wand. The manditory multiplayer is the part we're interested in though.

MTV Multiplayer blog has a bit more information on Sackboy's Prehistoric Moves over at The Blog.

You can play local co-op games with friends who are using old-fashioned DualShocks, but you'll need to have at least one Move/Eye combo installed in order to get it started.

Which makes it sound more like the Move wand is the required piece, not the multiplayer itself - but the multiplayer is required if players want to use the original PS3 DualShock controller. We'll know more soon, since the game launches December 14th for $5.99, or free a week earlier for Playstation Plus subscribers.