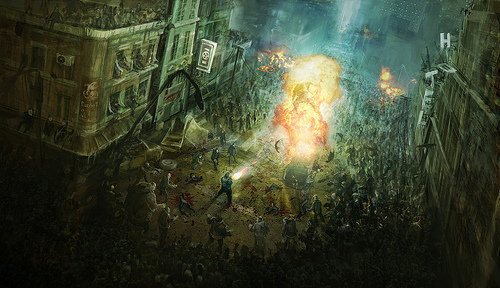 Another zombie game is on the horizon, and you can bring a friend for the apocalypse.  Dead Nation will be shambling onto the PlayStation Network next Tuesday, November 30th.  We liked what we saw in out preview of the game.  The lighting, sound, and weapons customization caught out attention.

Dead Nation features two player online and local co-op, upgradeable weapons and armor, and a 'lengthy campaign'.  It looks like some form of online stat tracking will be implemented, as there is a metagame that compares high scores from different counties around the world.  The game will also have a Platinum Trophy, a rarity for a downloadable title.  Dead Nation will be available next week for $14.99 exclusively on the PSN.

Check out the following weapon and armor video.  Hopefully, the attention to detail will set this top down shooter apart from the bloated zombie market.