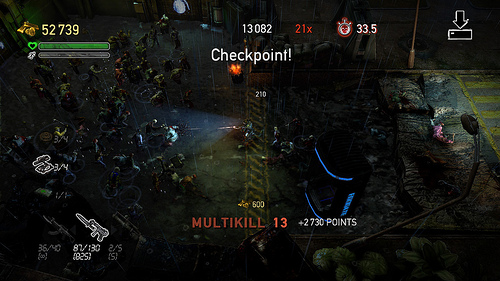 Dead Nation has received patch 1.08, which, if you own the base game - isn't terribly exciting.  But...BUT...if you own the Road to Devastation DLC the patch is going to add a new game mode called Arcade as well as new concept art to unlock.

The arcade mode adds a revival checkpoint system as well as a difficulty setting - making the challenging game... slightly less.  You'll need the DLC to access this mode though, which will set you back $3.99.

We reviewed Dead Nation on release and gave it a solid score, though we docked it for it's lack of voice chat - which was added in later via a patch.  On the whole Housemarque has done an excellent job supporting Dead Nation post launch and listening to community feedback.  Remember when the game didn't have online co-op?  Yeah, they fixed that.  Voice chat?  Fixed that.  Too difficult?  Fixed that.

I think in a lot of ways, Dead Nation's community and popularity in co-op took them by surprise.  House Marque co-founder Ilari Kuittinen had this to say about co-op in Dead Nation.

It's interesting to note, that there are a segment of players, who are playing games exclusively in co-op mode. According to the leaderboards, it seems that not all the gamers buying Dead Nation are playing the single player campaign version of the game at all.