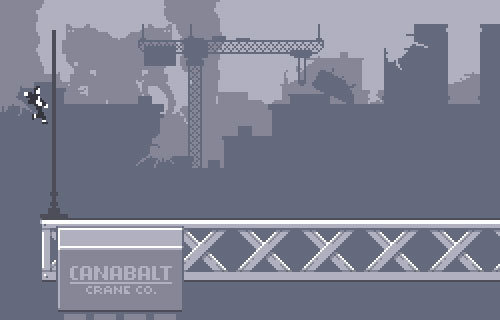 Pixel art has really taken off recently, delivering a plethora of amazing visuals in games and beyond. Canabalt is a flash game that benefits from amazing pixel art graphics where you play as a suited man running to escape his crumbling city. Now this game has been recreated for the Canadian Winnitron 1000 "Indie Arcade Machine" by Adam “Atomic” Saltsman, complete with two player co-op.

First, what is the Winnitron 1000? Well, the basic premise is it is classic arcade cabinet refitted with the ability to play indie games. It's toted around the city of Winnipeg for players to enjoy. With a bit of attention, we're hoping to see this platformer (complete with co-op) enter the realm of international distribution for all to enjoy.

The game Canabalt is a platforming title where you are a little pixel man running through the city rooftops to escape before it collapses. Basically your only goal is to jump (press one button) before the screen gets to the edge of a building, or you'll fall to your death in a flashy "Game Over" screen. It's actually quite enjoyable, and playing it as a co-op game could be incredibly fun.

For now though, it looks like we'll either enjoy the free-yet-single-player flash game on PC, or the single player iPhone version - unless you live in the city of Winnipeg.