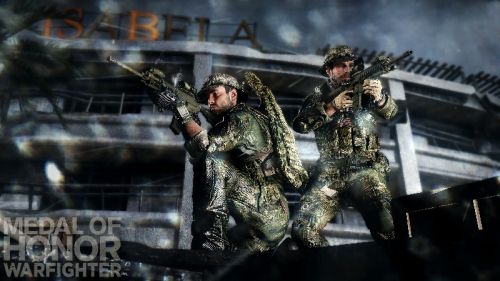 While we were partying it up at PAX we managed to get some hands-on time with Medal of Honor Warfighter. We've been trying to nail down any possible co-op details since it was first announced back in February. The good news is that the game will include a compelling single player campaign which explores some of the hardships professional Tier 1 operators (very, very dangerous people) face on and off the battlefield. There will also be several multiplayer modes, one of which uses two man fireteams.

The following video shows eight minutes of footage from the single player campaign. This is the same demo we played at PAX. What you won't see in the video is a cut scene depicting a battle-hardened soldier trying to explain to his wife why he needs to return to duty. He's doing this while laying in a hospital bed, recovering from injuries I believe he sustained in a terrorist attack.. It's all rather unpleasant. Enough of that. Watch this video of Warfighter in action.

Wow! That looks awesome! It plays well, too. I love the Rapid Transition Sight system. Simply click a thumbstick to adjust your aim from a long-to-medium range scope to iron sights for close encounters. I hope to see the RTS in more military shooters moving forward. The headshot indicator felt a little arcadey for a game with such a serious tone, but it does offer a visual ding. Destructable environments crumble under fire, offering both a satisfying weight to the gunplay and also a sense of dread as your cover is chipped away. And who doesn't like raining down hell with a red-hot minigun?

The bad news is that there is no cooperative campaign, survivor mode, or co-op missions. The game won't have a co-op mode at all. Even the two man fireteam option, which allows players to rely on each other for information, cover fire, and ammunition on the battlefield, is a solely adversarial mode. What a bummer. Still, fans of military shooters who enjoy a heavier story line should keep an eye on this one.

Medal of Honor Warfighter will launch on October 21st for the Xbox 360, PlayStation 3, PC, and Wii U.