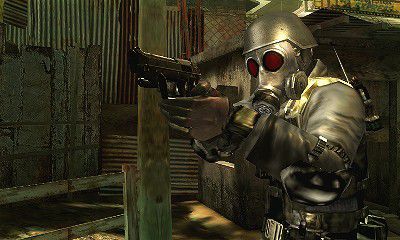 Andriasang.com has some new details about the gameplay.  It looks like aiming will now be done in the first person, as opposed to the over-the-shoulder camera mode  made popular in Resident Evil 4.  The game boasts that you can now move freely while aiming.  You know what other game allowed you to move freely while aiming?  Contra.  Way to hit the ground running, Capcom.  I kid, I kid.

Some RPG elements have been implemented, allowing players to customize weapons and level up skill sets.  There are four confirmed palyable characters: Chris Redfield, Claire Redfield, Jack Krauser, and Hunk.  No word on Tofu.  The game is reportedly 70% complete, so anything is possible.  No official release date has been announced, but we remain cautiously optimistic for a 3DS launch day debut.