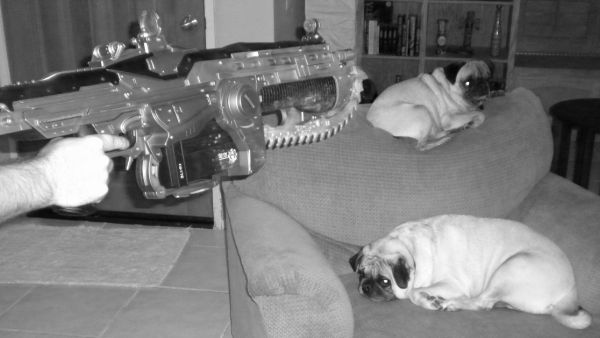 ...or these pugs get Lancer-ated.

That's right.  I'll be at the Spike TV Video Game Awards this Saturday, December 11th.  I'll be nervously talking to celebrities and industry icons on the red carpet.  I will also be asking them what they think of co-op gaming, and hopefully getting more than a blank stare in return.

Yes, there's a red carpet.  And I'm going to be covering it.  The event should start up around 2:30 PM Pacific time.  (That's 5:30 PM for you East Coast folks, just in case you decided that's too much math for the end of the week.)  Follow me on Twitter @Cubninja.  It's a nice new Twitter account, so you can be the first of your friends to tell me how awesome I am, or how much I suck.  Send me questions you want asked, and I'll ask them.  (As long as they are awesome.)  Do you want to know if Chris Hemsworth (Thor) can take me in a fight? (Probably) How about Rutina Wesley? (True Blood's Tara) (Definitely).

This is my first time doing anything like this, so it might be hilariously bad.  My biggest fear is saying to Nathan Fillion; "Remember, when you were the voice of Gunnery Sergeant Edward Buck in Halo 3?  Yeah, that was awesome..." a la Chris Farley.   And then proceeding to do that over and over again throughout the whole red carpet affair

I will also get a chance to talk to industry people, and believe me, I will be asking the hard co-op questions, like;

"Why do you hate co-op?  Did you have an older brother who never let you have a turn when you were growing up?  Are you trying to be the big bully brother to us all?"

"Do you really think co-op hurts the story?  Do you know how many people playing Call of Duty: Black Ops skipped the story all together? Two damn Master Chiefs could play in the first Halo, and I don't remeber anyone complaining about that."

The Spike TV Video Game Awards will be broadcast live, Saturday, December 11th at 8 p.m. Eastern, 5 PM Pacific.  The festivities begin two and a half hours earlier at 5:30 PM Eastern, 2:30 PM Pacific.  I'll be tweeting as much as I can. Follow me to see how the show is behind the scenes, or follow me to see if I have a panic attack.  I'm not what you would call a 'people person,' so it should be interesting.    Either way, it will be better than a hard punch to the groin.  (I make no promises that it will actually be better than a hard punch to the groin.)