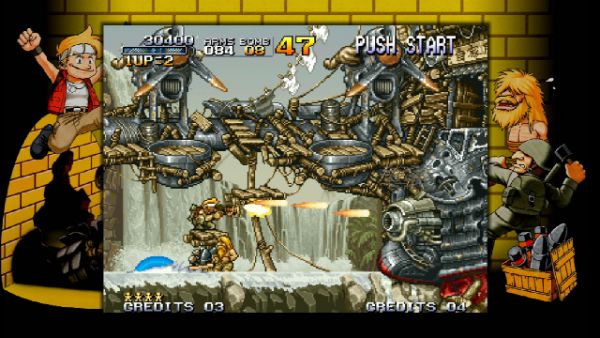 The NEOGEO system was quite popular in arcades in the 1990s.  Though renowned for a slew of great fighting games like Samurai Showdown and King of Fighters, some excellent co-op titles were available on the platform as well.  Later this month, NEOGEO Station is coming to the Playstation Network, bringing classic NEOGEO titles to your console or handheld.

NEOGEO Station is similar to the Wii's Virtual Console; periodically, new games from the NEOGEO library will be released, costing $8.99 for PS3 and $6.99 for PSP.  Local and online multiplayer, including co-op will be supported for the games (plus ad-hoc on the PSP).  Of the ten titles that will be available at the service's December 21 launch, only Metal Slug and Alpha Mission II (a shmup) have co-op.  Let's hope a few more NEOGEO co-op classics will be available in the future.