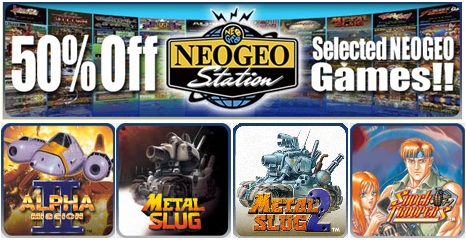 The Playstation 3 is pretty much the place to go for downloadable NEOGEO games thanks to SNK's NEOGEO Station label. Not only does the Station offer a broader selection of NEOGEO classics than the 360 or Wii, but it's even got a massive sale going on right now. Through September 25, 16 classic NEOGEO games are available for half off their regular prices, making them just $4.49 each. This includes at least four co-op classics: Alpha Mission II, Metal Slug, Metal Slug 2, and Shock Troopers.

The full list of SNK NEOGEO Station Games in the End of Summer Sale:

As you can see, SNK clearly doesn't believe in lowercase letters. Bolded titles offer local and online 2-player co-op. Even the single-player games on the list tend to be great though.

The sale lasts until September 25, so get cracking, NEOGEO fans! I leave you now with Keith Apicary's 'Neo Geo Song.'