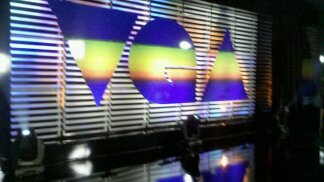 Our esteemed Managing Editor, Nick Puleo, mentioned an opportunity to cover the Spike TV Video Game Awards.  It seemed that I was the most qualified staff member to cover this event.  And by most qualified, I mean that I live closest to Los Angeles.  After we received confirmation on the press credential I had a sudden realization, which I shared with Nick in this Google chat message:

4:06 PM me: So would now be a bad time to mention my crippling fear of crowds, people, celebrity-worship, materialism, and just LA in general?
Nicholas: yes, probably
me: Then nevermind.

It appeared to be on like one of my favorite types of Kong.  So I crammed a backpack full of cameras I barely knew how to use, got some business cards printed up, and hit the I-10, westbound.  This is what happened.

Once I got there I checked in with all the other press.  After some waiting we were corralled into a long, dark room with a bright, logo-filled banner on one wall.  I recognized this as the backdrop where all the celebs and industry people would be photographed.  I was disappointed to see that there was no red carpet.  My badge even said "Red Carpet." There was shiny black tile, and they even had shiny black tile cleaners who appeared every few minutes to wipe down the floors.  I was down at the end of the press line, right next to where Spike TV was conducting their interviews.

A little word of advice.  If you ever get a chance to do something like this, wear comfortable shoes.  You wait a long time for the celebs to make their rounds.  Once the celebrities got to where I was standing I realized this was a two person operation.  You could film, or take audio, but not both.  I quickly abandoned my camcorder, and was left with a hard decision.  Should I use my wife's purple Coolpix camera and be the envy of all in attendence, or my Droid 2.  I chose to keep my dozens (Literally.  Like two dozen.) of Twitter followers up-to-date, so the Droid 2 won out.

Like I said, I was at the far end of the line, so by the time they got to me a lot of celebs just blew right by.  Others stopped and chatted for a while.  There was a crowd of loud fans right next to me, so my audio was shot.  Since this was my first rodeo, I kind of just went with the flow.  I got to ask a few questions from a few people, and take a few pictures. I talked to Blue Mountain State's Darin Brooks about Call Of Duty: Black Ops.  He said he plays a lot, but hadn't 'prestiged' yet.  I can't say I blame him.  Competitive multiplayer is brutal.  Also, he might have been the nicest guy there. The woman in red is Courtney Hansen.  She's the host of Spike TV's Powerblock.  I pointed my camcorder at her for about three minutes while she talked to me about Need For Speed and racing.  I didn't hit the Record button.  Sorry, Courtney.  She was well-informed and engaging, and I royally screwed that up. Here's a shot of NPH talking to Spike.  Yep, I...didn't get to talk to him.  I got a couple of other tiny shots of celebrities, most notably Nathan Fillion and Olivia Munn.

I got a chance to briefly speak with Jennifer Hale of Mass Effect 2.  She plays the role of lady Commander Shepherd.  When asked why she got into voice acting she said she "just got it."  Something about it just clicked for her.  I then eavesdropped on interviews of Ed Boon, the creator of Mortal Kombat, James Burns (Frank Woods) of Call of Duty Black: Ops, and director Guillermo del Toro.  There was a lot more teases than actual news, unfortunately.  I even got a few minutes of good video of The Legend of Neil's Felicia Day, but the audio got mangled. After a while I actually got comfortable and started asking more questions.  I hit my stride when Carlos Ferro arrived.  He has done voice work in dozens of games, including the voice of Leonardo Da Vinci in Assassin's Creed 2.  But you probably know him best as Dominic Santiago from the Gears of War games.  I asked if he uses his 'Dom' voice when playing, and he said he did all the time.  When asked if he could give me any info on Gears 3, he said, "It's not what you're expecting.  It is not Gears 2.5."  Looks like I got more out of him than the rest of the world got out of Epic at the VGAs.  Also, I finally realized you need to get someone's attention to get a good picture. Well, that was my first Red Carpet Event.  It turned out I wasn't credentialed for the whole show.  Even when I screamed: "Do you know who I am?  I write about video games on the internet!  There can only be a handful of select experts with my particular skill set.!" no one listened.  So I packed up my stuff and headed out.  I pulled into my driveway right as the show ended.  I asked my wife how it went.  She wasn't impressed.  Sounds like I had a better time on the I-10.  Still, I'd do it again.  Next time, I'll wear some comfy shoes.