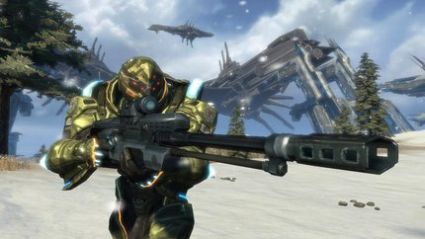 Last month, with a little help from Eurogamer.net, we detailed the new 4 player co-op "Swarm Mode" for Section 8: Prejudice, the sequel to the drop-trooper-shooter, "Section 7: Pride".  What's that?  I am being told that the first game was simply titled: Section 8.  That's a shame.  The next logical step would have been of course, "Section 9: And Zombies."  But that's neither here nor there.

Did you see that price point?  Yes, the sequel to a full priced retail game is now going to be a digital download available on Xbox LIVE, PlayStation Network, and PC for the low, low price of $14.99, or 1200 Microsoft points.  This won't be a scaled down version of the game.  According to the Section 8: Prejudice website:

Prejudice is a full-featured, sci-fi-themed, first-person shooter that delivers a 5-hour, story-driven single-player campaign, robust online multiplayer for up to 32 players across a variety of maps, and a new 4-player co-op game mode, entitled Swarm. As if that wasn’t enough, all game modes and content will be playable offline, as the $14.99 product also includes full bot support.

If Swarm Mode is anything like the Combat Training from Call of Duty: Black Ops, sign me up.  The above statement could be taken as 4 player local co-op, but I'm not willing to say that definitively.  I just hope we can get split screen with online support.  We'll let you know when we know.  Developer TimeGate Studios also plans to have plenty of DLC.

In addition, TimeGate plans to heavily support the community after launch by expanding Prejudice with a substantial downloadable content plan.

I wonder how this will affect other games that release at $60.00, only to have additional paid content released a month later.  Everything in that first quote can apply to many retail shooters that have released over the past few years.  We'll see just how much quality fifteen bucks will get you when the game releases early next year.  Here's a sneak peek of the Swarm Mode beta.  Thanks to XBLAFans.com for the vid.