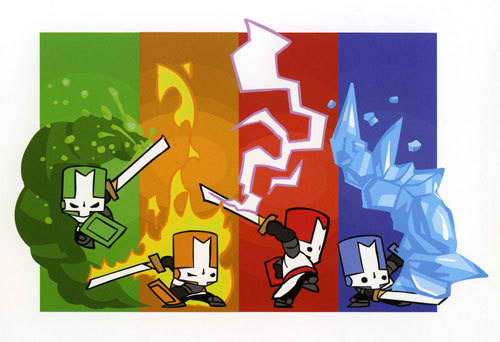 The excellently awesome Castle Crashers has reached a gaming milestone.  The Xbox LIVE arcade title hit 2 million players on the leaderboards over Christmas weekend.  That's not including PSN players.  For those of you who don't know, 'excellently' awesome is the sixth highest level of awesome.  It only gets awesomer from there!  Official* Top Five Awesome Rankings from least to greatest: incredibly, fantastically, moderately (weird, I know) , co-operatively, and finally, epically. Awesomely awesome is the worst level of awesome, for obvious reasons (If you're oblivious to the obvious, see inverse ninja thoery.)

Somehow, the four knights from Castle Crashers are immune to the inverse ninja theory.  This is either because they are knights, not ninjas, or simply because they are color coded, and as we've seen with TMNT, Power Rangers, and effing Voltron; if you have a color-coded theme you are frick'n invincible.  More importantly, you are marketable.

The Behemoth,  developer of Castle Crashers, went on to say: "If we put all these people in a place and gave it a zip code, this would be the 5th largest city in the US."  It would also be more than twice the population of Detroit, which is just another disappointing feature of the Motor City, the two most prevalent being the Lions and the lack of Robocops.  I know I should lay off of Detroit, because "them's living in 'Mad Max' times", (best Simpson's  line in a long time) but my lack of self control is one of my most endearing features.

Anyway, Castle Crashers is a great  4 player local or online co-op game, but most of you already know that. Behemoth's next game is Battle Block Theatre, and it should be out on Xbox Live sometime next year, which according to my calender, is two days away.  Do you  hear that Behemoth?  You've got 48 hours, after that, I... guess I'll just wait patiently for the release.  If you haven't played Castle Crashers with friends yet,  you are missing out.