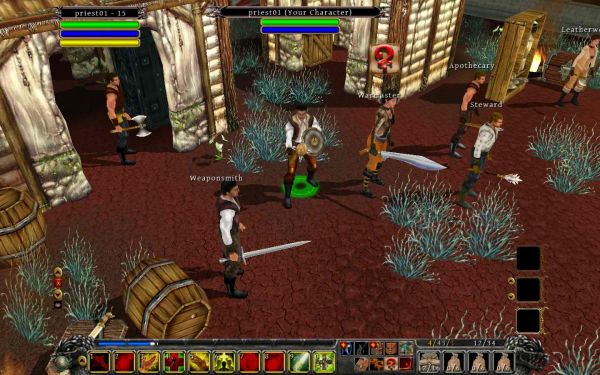 Indie developer Soldak Entertainment's Din's Curse is getting an expansion pack.  The randomly generated dungeon crawler impressed us, earning a 4 out of 5 in our review from last April.  Din's Curse is a Diablo-esque game that has no hard limit to the number of possible co-op players.  You can add folks until the game's frame rate crawls.

Players who pre-order the expansion pack, called Demon War, will have full access to the beta.  Gamers will be able to give their input on the developer's forums and help shape the game.  The pre-order costs $8.99 and the price will go up after the beta.  It is available for Mac and PC.  The final version is scheduled to release in Q4 of 2011.

This is what players can look forward to as far as plot is concerned.

The demons of Aleria are furious! After the 4th Great War and necromancer Ciglio's death, the undead horde has been causing utter chaos, attacking everything that moves... even demons. Demonkind were quite happy when Serina, a human city, was overrun, but that was before thousands of human zombies poured into Kraval, slaughtering the huge demon city. Thus began the Demon War. Demons of all kinds are fighting back. They're hunting down and killing any undead they find. Oh, and they blame the humans for this entire mess. For spite, they razed Serina to the ground even though it was already deserted.

As a servant of the mighty Din, it's your responsibility to safeguard humans from danger. This was a hard task before. Do you have what it takes to save humankind from the Demon War?