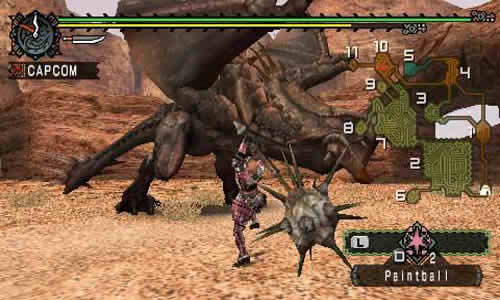 3DS is releasing, too, so (it seems like) the time to switch to a new platform is coming

This is the quote that has fans of the Monster Hunter series pondering the possibilities.  It comes from Capcom's CEO Haruhiro Tsujimoto, regarding, obviously, Monster Hunter and the upcoming Nintendo handheld, the 3DS.  Is the franchise going to jump the Sony PSP ship?  Probably not, but it looks like the series may be making the leap to 3D.  If the 3DS is as amazing as the industry buzz says it is, look for other franchises to pop up on the new platform.  (Pop up! It's funny because it's 3D and...nevermind.)

Capcom has already made Monster Hunter titles for both the Wii and Xbox 360, so it is not surprising that they would bring the game to Nintendo's new handheld.  The game is incredibly popular in Japan, probably due to the little known but practice of monsut kari ya dai, in which each newborn Japanese baby is issued the latest edition of Monster Hunter, and their infantile performance dictates their permanent social status.  Also, they think it's a documentary, so, yeah, it's pretty popular.*

*two of the previous three sentences may be grossly inaccurate.