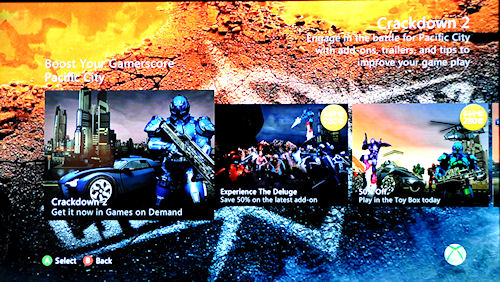 Sometime over the holidays we missed Microsoft posting Crackdown 2 onto the Xbox Live Games on Demand.  The four player co-op title features campaign co-op throughout - its a game with did quite the in depth review of - and for the most part - enjoyed what we got out of it.  Its currently priced at $29.99 which, surprisingly, is the price it goes for at retail.  This bucks the trend of digital releases on Xbox Live that seem to be priced higher than their retail counterparts.

.  Toy Box is the first piece of DLC which features jet pack shoes, new vehicles and a host of other tweaks.  Deluge is a four player co-op survival mode which we enjoyed way more than we should have.  Get it while you can Agents, because the deals on the DLC won't last long.