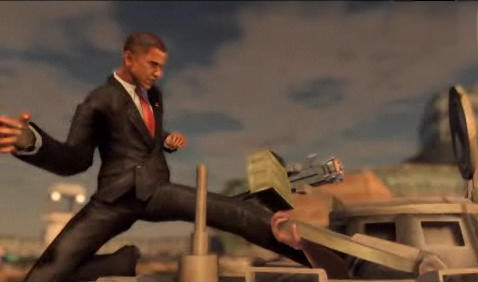 An impossible duo are going to save the world in Mercenaries 2: World in Flames.  Presidential hopeful Barack Obama is going to be featured as downloadable content.  But what about running mate Joe Biden?  No dice.  What about his opponent John McCain?  Too old.  But McCain's milftastic potential VP, Sarah Palin, well she'll fit into the war torn world of Venezuela just fine.

Both characters will be available soon for the game, though there's no word on whether this is premium or free content.  Personally, I hope I can make them a co-op couple.

We also hope we'll see more political figures in Mercenaries, perhaps Mercenaries 3?  According to Kotaku, the folks at EA already have a sequel in the works, and you'll have the entire Senate to choose from as your cast of characters.  Ok, we made that last part up.  But what we aren't making up is the fact that EA wants to have a Mercenaries 10.  No official word is 4 through 9 are required though.