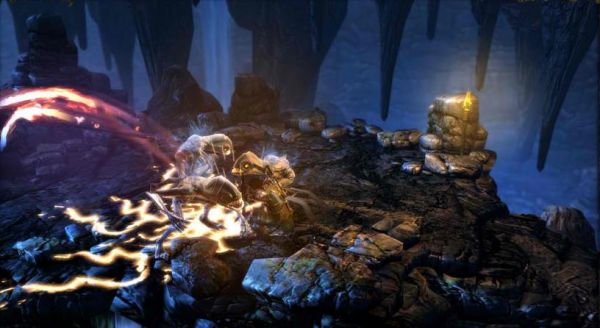 The developers of Dungeon Siege 3 recently spoke with CVG.com.  In the interview, lead designer Nathan Chapman and creator Chris Taylor discuss co-op on consoles and PC.

And obviously the co-op is a challenge on console... NC: Yes, that is almost one of the hardest things on the console. The big open multiplayer experience is a lot harder on console because you don't have things like dedicated servers, all that stuff you have on the PC. That drove a lot of the focus of the co-op, having small buddy-style co-op, four guys playing through the game.  Can you tell us about the jump-in jump-out co-op system on PC? NC: It will work just the same; you can have another person on a controller and it will work just the same. As far as other multiplayer stuff we can't really talk about that but there will be more in a few months. There's nothing PC specific. What I mean to say is that we've taken the heart of what you expect out of a PC RPG and brought it into this game. You should have a similar gameplay experience no matter what.

Chapman goes on to discuss mapping PC controls to a console controller, and other games that have influenced him.

The controls in Dungeon Siege 3 seemed to have been translated onto the controller quite well; can you talk a little about that? NC: One of the things that helps is that our project director and I probably play as many games on consoles as on PC. So I looked at Dungeon Siege 1 on PC and thought how can I take that game, Secret of Mana and Legend of Zelda and make that work.  I knew that was the right direction, the game needed to play like a mix of Dungeon Siege and Dark Alliance, the console beat-em-up hybrid games. That is where I think most of the direction came from, they work really well altogether and that's one of the things I'm happiest about. What other console games did you draw influence from? NC: I already mentioned Secret of Mana and Legend of Zelda, there's also Devil May Cry, which was a huge influence. The game doesn't play like Devil May Cry but looking at how it deals with certain things... I have tons of reference video from Devil May Cry up that we've been looking at just to see how they handle certain mechanics.

God of War is obviously big, even Ninja Gaiden, although it's a hardcore action game, the way they handle certain things like blocking that we're trying to bring into the game. There are actually a lot of influences on the game.

You can find the whole interview here.  They discuss motion controls, dodge a question about DS3's release date, and oddly enough, no one mentions In the Name of the King: A Dungeon Siege Tale.