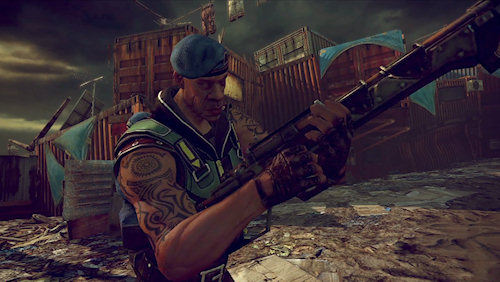 It's been a while since we heard anything new about Brink, the 8 player co-op title from developer Splash Damage.  But if you watched our Co-Op Games of 2011 Preview, you know it's still planned for this year.  The game's publisher, Bethesda, is kicking off the new year with a new developer diary and video.  The focus?  In game audio, specifically, the sound of the guns in the game.

The developer diary addresses a specific problem Splash Damage had when designing Brink - how do you have a game filled with up to 16 players firing guns at the same time not sound like an "aural mush."  The solution?  Make sweet music with sounds of guns.

... in the concept phase, the weapon sounds were designed in different timbres, almost like a choir (i.e. alto, baritone, tenor). The idea was that if weapons of a similar sound were played in close proximity, they would actually harmonise rather than drown each other out.

The choir isn't the only solution Splash Damage came up with to create realistic and pleasing weapon sounds.  One common problem with a game is the use of one firing sound to cover many different methods of firing.  For instance, a gun that is firing a single shot and then firing multiple have different subtle changes in the audio that when repeated from a single sample, just don't sound natural.

Aware of these issues, we decided to use neither of these systems and instead created a unique solution for Brink. We came up with a granular system that breaks up our recorded weapon burst of roughly 15 rounds into three main groups: Start, Middles, and Ends.

The full developer blog with Chris Sweetman, Audio Director of Splash Damage, can be found on the official site here.  Brink is scheduled to be released later this year with 8 player online co-op on the Xbox 360, PlayStation 3 and PC.  You can find out what we thought about the game from our E3 2010 hands on preview.