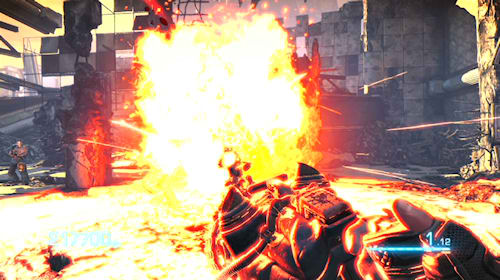 Out of all the gang bangs being viewed online right now, this is in the top 1,000.

We have a new video for Bulletstorm, the Unreal powered FPS from developer People Can Fly.  A few new skillshots are on display, most notably the Gang Bang, which, depending on your level of depravity, is or is not exactly what you think it is.  This could easily be turned into a debate over the differing moral opinions on sex and violence that seems to separate the U.S. from the rest of the world.  I'll gladly begin with my opening statement; "Ha! Them there fellas blow'd up real good!"

In co-op news, the  Bulletstorm demo dropped a couple of days ago.  No doubt many of you have played it.  Did anyone else go into rage mode when they saw not one, but two NPCs accompanying Grayson Hunt through the demo? Come on, People Can Fly, you've got to split that screen and hit us up with some local co-op.  I don't want to beg, but, please?  Could you add in a fully playable co-op campaign while you're at it.  But alas, I fear it is not to be.  You can still team up with your friends online and play Anarchy Mode, which is better than nothing.  Bulletstorm is scheduled for a February 22 release date on the Xbox 360, PlayStation 3, and PC.