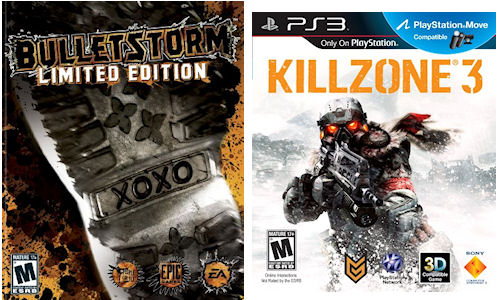 Two big games are out today fighting for your hard earned dollar.  Both feature some form of co-op combined with some intense looking first person shooter action.

Bulletstorm is out on Xbox 360, PlayStation 3 and PC with a four player co-op Anarchy mode that's playable online.  The game features over the top dialogue, over the top violence, and an over the top story for your gaming pleasure.  Word on the street this game is over the top.

Killzone 3 is out today exclusively on the PlayStation 3.  Its a game that had on again / off again co-op for the duration of its development - or at least rumors of it.  Finally Guerilla Games has settled on a two player local co-op mode through the game's campaign.

Which game will be getting your gaming time this week?  Or perhaps...both are.  Answer below in our new poll system!