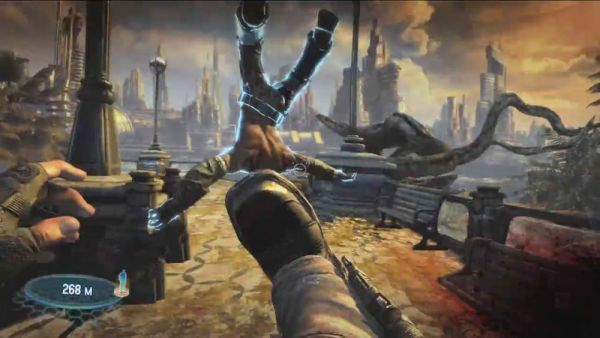 Bulletstorm, People Can Fly's much hyped-first person shooter/splatter fest, releases tomorrow.  Xbox 360 and Playstation 3 owners could play a demo for the game as early as January 25th.  PC owners...still don't have a demo.  You would think a game that has been this heavily marketed (Halo and Call of Duty parodies, Facebook content, Cliff Bleszinski's constant Tweets) would have an early demo on all platforms. According to Vice President and co-founder of Epic Games, Marc Rein, (or more accurately, according to his Twitter account):

Bulletstorm PC demo is in the works! Won't make it in time for ship date but should be available shortly after.

So what's the big holdup?  The most likely explanation has something to do with time and money, but I'm going to do the irresponsible thing here and just say it: No one likes PC gamers.  Nah, I'm just kidding.  The demo should be out soon, so gamers who like to try before they buy will have a chance to check it out.  I thought the demo was a fast-paced kill-a-palooza.  (I hit a group of guys with an elevator car. They squished real good.) Less discerning gamers can jump right in and buy the game tomorrow.  Cheer up, PC gamers.  If you decide to wait for the demo, and the full version stinks, you look like the smart ones, again.

Bulletstorm releases tomorrow for the Xbox 360, PlayStation 3, and PC.  The game supports 4 player online co-op in a survival-based Anarchy mode.