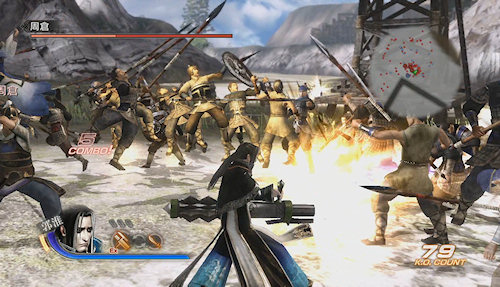 Prepare to put down the Yellow Turban Rebellion in 15 seconds flat thanks to some new weaponary in Dynasty Warriors 7 - most notably - the  arm cannon.  The latest trailer for the game gives us a really good glimpse at the gameplay  - which - mostly looks the same as the other six Dynasty Warriors titles.  Ok, so that's not completely fair - there is some real time weapon switching for massive damage, body surfing, and perhaps some co-op maneuvers.

We tried to look up whether or not the Chinese actually used an arm cannon during the period of the Three Kingdoms...but came up empty handed.  But we have no doubt that Dynasty Warriors 7 will accurately recreate just what it was like to have Lu Bu come kick our ass.  I can't wait to surf on his corpse.

Dynasty Warriors 7 is out March 22nd on the Xbox 360 and PlayStation 3 featuring 2 player online co-op.