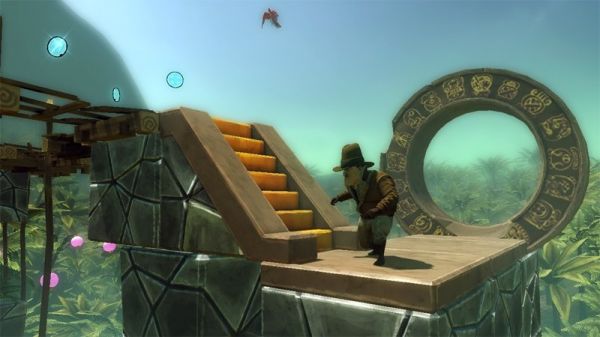 Fatshark Games, makers of Lead and Gold: Gangs of the Wild West, have announced a brand new puzzle/platformer named Hamilton's Great Adventure.  As you can clearly see from the screenshot above, the game's main character Hamilton takes a lot of visual cues from Indiana Jones.  The gameplay should borrow from that sense of adventure and mix in a healthy dose of puzzle solving as well.

On the co-op side of things player two can assume the role of Hamilton's bird Sasha.  What Sasha provides to the co-op puzzle solving nature of the game is interesting and often required perspectives.  Perhaps Hamilton simply can't see a certain area or clue to solve a puzzle, this is where Sasha comes in.  We assume this is a couch co-op only affair, but other features of the cooperative mode haven't been announced yet.

So far the game is only confirmed for the PC and "consoles" with a release date sometime in the first half of this year - though Fatshark is currently targetting April.