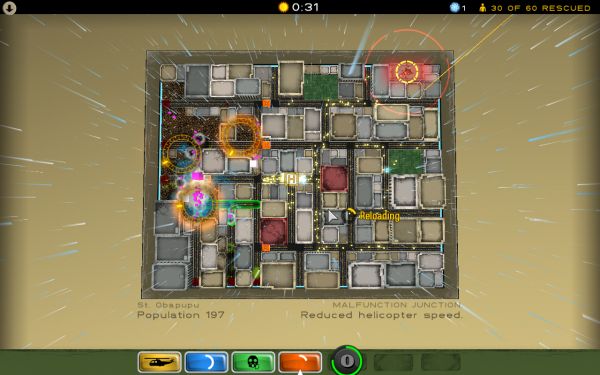 There's a new zombie game out now on PC, Mac and Linux - but its unlike any other zombie game on the market.  Atom Zombie Smasher is a new strategy game from developer Blendo Games, makers of Flotilla.  Atom Zombie Smasher is a strategy game that gives players an overview of a section of a city overrun by zombies. Players must select an evacuation zone and then protect it from zombies as they try to rescue a certain number of civilians per map.

There's an overall map at play as well, so you'll need to pick and choose your strategy as to which cities you save and when - choosing one over the other could result in multiple other cities being overrun.  You'll have numerous abilities at your disposal like artillery, dynamite, soldiers and others to try to defend an escape route for your civilians to the helicopter.  It's a bit like tower defense though it's faster paced.  The environments are also totally destructible which adds a unique twist to the usual pre-defined paths.

Atom Zombie Smasher also supports three player local co-op. Each player has their own cursor and can pick and choose which defensive means they want to launch.  This really seems to help even the odds in gameplay as you'll quickly see the zombies will overrun a city in no time flat  - especially once it turns into night.

One nice touch is the ability to mix mouse/keyboard and controller options for co-op.  You can seamlessly drop-in or drop-out players simply by pausing the game.

There's a full co-op enabled demo for you to give a try and the full version of the game will set you back $15.