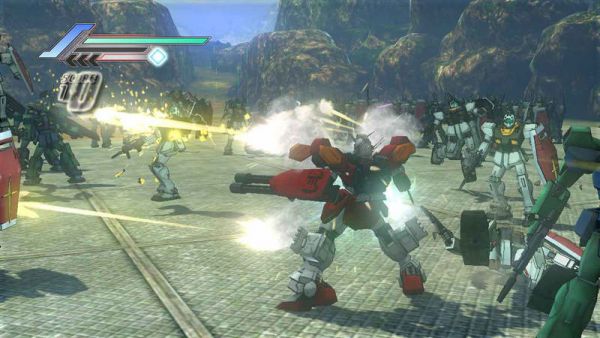 Like sands through the hour glass, so are the releases of Dynasty Warriors games.  I'm saying there's a lot of them.  After the umpteenth retelling of Romance of the Three Kingdoms, someone over at Koei decided the Gundam series had a story convoluted enough to make an acceptable plot for a  DW game.  So they added giant robots to the mix.  Enter Dynasty Warriors: Gundam 3.  By now you know the drill.  If you are new to the DW franchise I'll sum up: Pick one of dozens of characters and fight hundreds, if not thousands of enemies by mashing the attack button.  Now with robots.  Amazingly, it's not as awesome as it sounds.  If you haven't played a DW game in a while it is nice to pick one up every now and then, if only to remind yourself of why you don't own all the DW games. (Confession: I loved DW 3 and 4.)

This latest iteration features cel-shaded graphics which make the Mobile Suits look pretty darn good.  The graphics really harken back to the look of the anime.  Four player online co-op has been confirmed by Koei Warriors.   There are a host of other features, including over 50 playable characters and over 70 upgradeable Mobile Suits.  New techniques like Partner Strike, Emergency Dash, and Recovery Gauge Systems are supposed to add a strategic element to the game, but I'd wager you can just beat on the attack button until your special move charges up and then unleash particle effect hell on the mindless drones surrounding you.

Dynasty Warriors: Gundam 3 is available for the PlayStation 3 and Xbox 360.  It's due out in North America and Europe this summer.  The game is already available in Japan, basically because there, the future is now, and the Gundam series is a documentary.