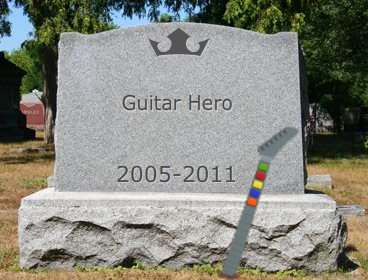 Today is the day the music died.  Activision has dissolved the Guitar Hero business unit within its company, laying off almost 500 employees and effectively ending the franchise...for now.  This decision affects both the Guitar Hero and DJ Hero games as well as all future DLC.  New songs will stopped being added to both games after this month.

This decision comes out of Activision's quarterly conference call with investors, one in which they reported double digit increase in percentage of profits year over year.  Of course this increase is attributed to Call of Duty: Black Ops and not to the decline of the music genre.  Last year we brought you news that Rock Band developer Harmonix was suffering from similar problems with its parent company Viacom looking to sell it off.  Eventually it did get sold...to itself, though the future of music games on that platform have yet to be seen.

Many folks blame Activision for the state of the music genre, this due to the yearly -sometimes bi-yearly -release of new "Hero" games.  Eventually the market just became over saturated and it wasn't long before it simply grew stale.  Adding Rock Band titles to the mix we sometimes saw the upwards of 6 to 8 music games released a year - this simply wasn't substainable.

But like everything in this industry, what's old becomes new again, and I'm sure it won't be more than a few years before we see the "Hero" franchise back in action - hopefully in a much more toned down and moderate amount.  We've all had some good times with our co-op buddies, jamming out in our living rooms, so we'll all miss the game that started it all.

May Guitar Hero power slide its way into paradise....