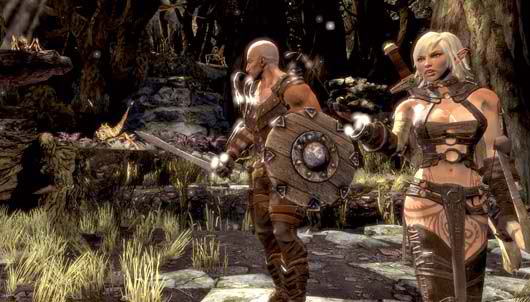 Hunted: The Demon's Forge has managed to stay on our radar since it was announced almost a year ago.  A few trailers have shown glimpses into the world of Hunted.  Our co-op interview with developer inXile Entertainment's Brian Fargo and Maxx Kaufman offered more insight into the gameplay and co-op dynamics. The two player online co-op title has been dubbed a fantasy Gears of War, due to its cover system and other game mechanics.  This isn't necessarily a bad thing.  For fans of Gears, swords and sorcery, and armor bikinis, this is a great thing. This latest trailer has plenty of gameplay footage, and even a little humor.

Hunted: The Demons' Forge is available for the Xbox 360, PlayStation3, and PC.  It is scheduled for a June 1st release date, and supports two player online co-op.