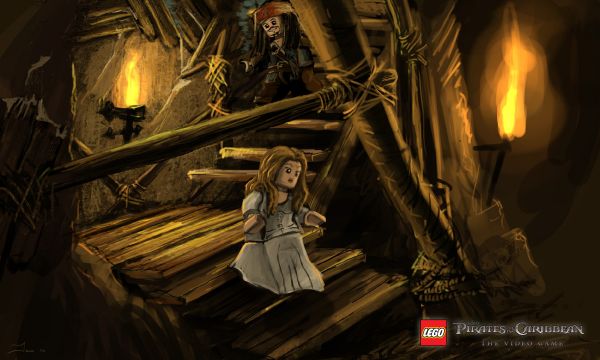 TravelersTales has announced its next set of LEGO’s with the LEGO Pirates of the Caribbean: On Stranger Tides game, to be released in May of 2011. MTVMultiplayer went a little hands-on with this beauty of a game and brings back the goods for us to savour before the titles release.

First off, the LEGO Pirates of the Caribbean game will cover all four of the movies (including the yet-to-be-released fourth film, “On Stranger Tides”) so you won’t have to worry about missing any of the plot moments thus far. The game seems to follow the tried and true formula that makes the LEGO games amazing; including local co-op and the humor we’ve come to expect and love.

There are a few notable changes to this installment of the LEGO series, however - including the availability of secondary powers, and the use of vehicles in-game.

Since "Pirates" is set in a swashbuckling world with supernatural elements but no traditional "magic" to speak of, character abilities tend toward the mundane. Jack Sparrow has his compass of course -- using it in certain areas reveals a path on the ground which, if followed, leads to a diggable "X"-marked spot -- but sword-swinging, axe-throwing and the like are your more common puzzle-solving tools.

While sailing ships will of course factor into the game, TT Games' Head of Production Jonathan Smith confirmed that there won't be any vehicle-based chapters. There will be things for you to ride on however, like donkeys. Presumably horses too, but I only saw a donkey.

No Force powers or Bat-suits for us here - don’t worry though, you’ll be able to use barrels (from the films, it’s humorous even without the LEGO silliness at work) to explore under water. That’s worth almost the same as building a wall with your kinetic powers, right? We’ll know for sure sometime around May 20th, 2011. That’s when the Pirates of the Caribbean: “On Stranger Tides” film will be in theaters anyway.