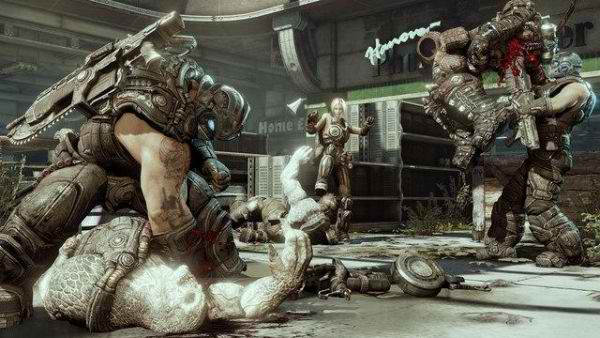 Mark September 20th on your calendars, chainsaw fans.  That's when Gears of War 3 will be hitting store shelves.  If you remember correctly, Gears 2 ended with Marcus and Co. killing a bunch of fabulously glowing Locusts.  The conclusion of Fenix family fun time will have more guts, more guns, more glory, and more controversy.  Remember, the fairer sex is in the combat mix now.  That means plenty of fee advertising on cable news the second an image of Anya or Sam taking a Lancer to the face gets leaked. I'm guessing sometime around August.

New multiplayer stages and weapons abound, with each weapon supporting its own execution move.  A four player co-op campaign is supported, as well as the five player co-op Horde mode.  An all new co-op mode, the awesomely titled Beast Mode, will also be making its debut.  When Beast Mode is activated you will be wearing the massive boots of the Locust Horde as you do battle against the pathetic human army.  As of now, Gears of War 3 will be exclusive to the Xbox 360.