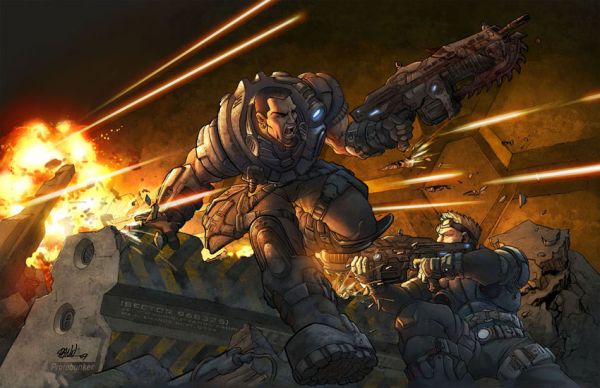 During a recent press conference, a boatload of stuff was announced for Xbox 360 - a lot of it pertaining to upcoming co-op releases. Major Nelson was kind enough to compile all of the news announcements on his blog for us. We're especially excited to see the Beta event for Gears of War 3 is public starting mid-April, but there are others to look at as well.

It looks like the Gears of War 3 multiplayer beta that everyone with a 360 and an internet connection has a chance to get their hands on in April is a versus multiplayer only. You'll be given the opportunity to vote on your favorite maps and such over at the GoW3 Facebook Page. We'll get to see the full game - co-op and all, starting September 20th (September 22nd for Japan).

Two co-op game add-ons were announced with short notice before release, including some new Halo: Reach maps, and some more Fable 3 DLC that we've already discussed this week. Along the lines of Fable 3 news, the PC version has been officially dated May 17th.

Halo: Reach Defiant Map Pack – Available on Xbox LIVE for 800 Microsoft Points on March 15, the Halo: Reach Defiant Map Pack introduces three stunning new battlefields for the most critically acclaimed shooter of 2010. Set in the heat of the legendary Battle of Reach, the three new warfronts – Condemned, Highlands and Unearthed – are primed for non-stop action in Firefight and all competitive multiplayer modes.

Finally in the co-op news realm, The Dishwasher: Vampire Smile will be playable in 3D. You will need a 3D television and a desire to see some gory platforming action in all three dimensions, but it is doable.

The Dishwasher: Vampire Smile – Created by award-winning indie developer James Silva, “The Dishwasher: Vampire Smile” is the stylistic action platform sequel to 2009’s “Dead Samurai.” The exclusive Xbox LIVE Arcade title features solo and co-op campaigns, 50 intense arcade challenges, an almost endless Dish Challenge, and now for the first time, the combo-fueled action will be playable in 3D. Grab your six foot long syringe and sharpen your cleavers, because it's about to get bloody.

Whew - that's a lot of news to cover for one post. Best way to start the work week? We think so.