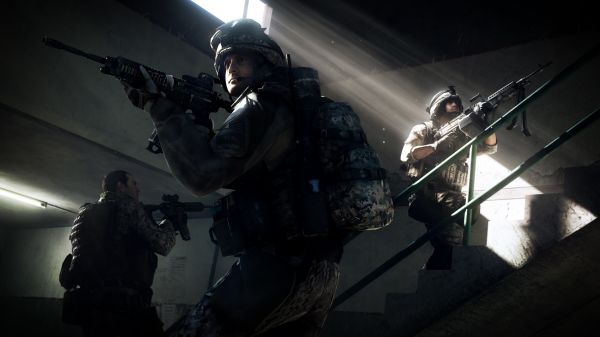 Last night at GDC, EA took the curtains off of Battlefield 3 - showing for the first time a significant portion of the game's single player gameplay.  Everyone's immediate reaction after watching the almost 3 minutes of footage seems to be - "is this EA's answer to Call of Duty?"  That may have officially been Medal of Honor, but Battlefield 3 sure looks the part too.

After being teased with the short trailer earlier last week (below), Jim compiled all the info we know about the game to date in a Battlefield Report.  We've got prone, customization, squad gameplay, and interesting animation tech gleamed from EA Sports titles making for some realistic looking - and playing - Battlefield goodness.  We also know the game is going to have an online co-op campaign, separate from the single player.

So the teaser only gave us some glimpses of the gameplay, but the full trailer shows so much more.  The setting is somewhere outside of Iran, which apparently is dealing with earthquakes in the year 2014.  This mechanic of buildings rattling, crumbling, and collapsing are apparently woven into the gameplay.  There seems to be a heavy reliance on these scripted events - a sniper from a window taking out a fellow soldier - you having to drag his body to safety.

The trailer gives us a good idea of tension, how a game isn't always just about constantly shooting everything that moves.  This is perhaps where it differentiates itself from the Call of Duty series.  All that being said, the Battlefield series have always had a distinct flavor and for those that have followed it since its birth on Wake Island, it seems to be somewhat missing.

The first time I saw the demo I asked Bach, the developer who showed me the game, where the Battlefield signatures were. I told him I'd seen what looked more like the competition's game or like the rebooted Medal of Honor from last year than it resembled what I think of when I imagine the sandbox, choice-filled gameplay of Battlefield. Later for that, DICE's Bach said. "We want to show we can do what everyone else was doing."

It seems right now EA is content with saying - everything you can do we can do better - and we can do more.  We'll have to wait and see exactly what the co-op holds in Battlefield 3, but the trailer has already given us an impressive look at the shooter which should hit later this year on the Xbox 360, PlayStation 3 and PC.