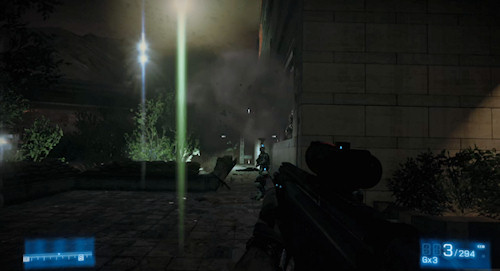 EA just sent along the first Battlefield 3 trailer taken directly from the Xbox 360 console, up until this point, the trailers and gameplay for the game have been from the PC or PlayStation 3 version.

The new video is called Operation Guillotine and is taken from the single player campaign.  While it's not a co-op mission, it gives you an idea of the intensity Battlefield 3 is going to offer.   The mission follows U.S. Marine Sgt. Blackburn as he enters the city of Tehran for a joint operation to capture key members of the PLR leadership.  The night missions shows off DICE's Frostbite 2 engine - especially the lighting and explosions it's capable of in a night mission.

Battlefield 3 is out on October 25th for the Xbox 360, PlayStation 3 and PC with two player online co-op.