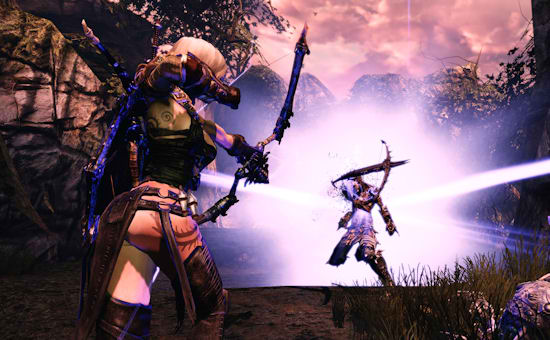 A pic so nice we used it twice.

Last week we ran a preview for Hunted: The Demon's Forge.  There were so many features jam packed into that article we were afraid some of our community members may have missed a huge chunk of co-op news. Here's a snippet from the preview, in case you missed it.

-due to the overwhelming number of requests for couch co-op in the game, inXile has added split screen play to compliment the game's online co-op.

You heard that right.  Split screen co-op support.  Hunted: The Demon's Forge has been dubbed "Spears of War," due to it's Gears of War-like style of play.  You can check out a trailer here, and for our in-depth impressions, be sure to read our hands-on preview.   Hunted: The Demon's Forge will be out June 1st on the Xbox 360, PlayStation 3, and PC.  It will support two player local and online co-op.