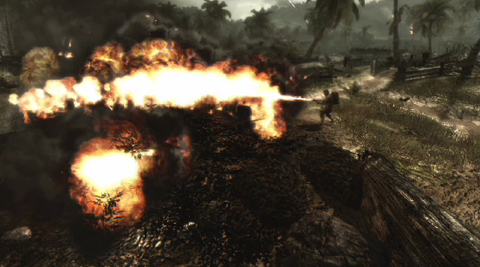 Strictly speaking, as a co-op centered web site, we should focus as much as we can on the co-op aspect of games that have some form of co-op. Sounds simple enough, right? I mean, yes the odd detail about new costumes or added modes is nice, but the focus of the site should be all co-op all the time.

Every once and a while, a certain thing about a co-op game is so sweet that even though it's not specifically about co-op, it's stilll epic. This is one of those instances. You see, Activision has released a 3D screenshot of Call of Duty: World at War. The screenshot is of the flamethrower in action and is just plain pretty. So hit the link and enjoy some 3D goodness.