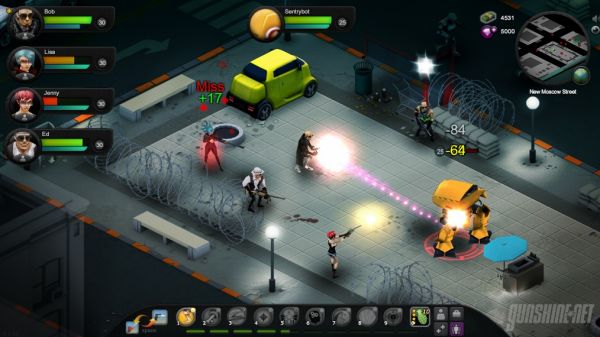 There's a new game that just hit closed beta in the free to play browser based market that's caught our eye.  It's called Gunshine.net and its from a new company named Supercell that was founded by ex-Remedy developers and invested in by ex-Sony executive Phil Harrison's investment firm.

The game is a tactical RPG at its core and immediately after looking at screens you'll get a distinct Syndictate vibe - and that's a very good thing.    As we said, its a free browser based game that utilizes your social networks to invite friends to join in for some co-op action.  The game allows you to invite up to three other friends for 4 player online co-op.  From the press material it seems co-op is designed for players who want to take on the tougher boss characters in the game.

Sadly the game is in a closed beta test right now, so you'll need to get invited to check it out.  Luckily giving them a "Like" on Facebook enters you for a chance to get access, so if the game interests you, like away.

We've posted the first trailer below as well as a fresh batch of screens.  The game looks surprisingly good for a browser game and you definitely can't beat free to play.  There's no word yet on what kind of premium content Gunshine.net is going to charge for yet, but at least we have someone trying something new and unique.

Hit up www.gunshine.net for more info.