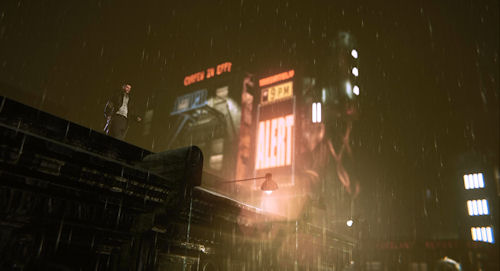 Last week at GDC, Epic Games showed off a new version of the Unreal Engine 3 that boasted a ton of new features.  To showcase this, they created a demo called "The Samaritan."  In a look and setting that clearly looks inspired from Bladerunner, we see a rainy futuristic city with neon lights reflected in every puddle.  A man on a rooftop witnesses a beating and jumps in to help out.

The graphics on display are nothing short of breathtaking - its something that Epic calls their vision for the future of games. Apparently the future has come sooner, rather than later, as today the latest version of the UDK is out including most of the features on display in the Samaritan realtime demo.

-          Image-based reflections that allow surfaces of any shape to reflect an approximate version of scenes, with varying glossiness across surfaces, anisotropic HDR highlights and anti-aliasing;

-          Anti-aliased masked materials that super sample the edges of masked and alpha-tested materials, making character hair more look realistic than ever before;

-          Bokeh depth of field providing close to film-quality DOF, with artist-controllable Bokeh; and

-          High-quality dynamic shadows from many lights on the environment, such as shadows for point lights and other light sources.

NVIDIA’s APEX technology has also been integrated into the engine and ships with UDK.

The Unreal Engine is the engine that powers some a lot of great co-op games - Gears of War, Bulletstorm, Army of Two, Monday Night Combat, and Dungeon Defenders are just some of those highlighted.  But you don't have to be a major triple A studio to create your own Unreal Engine game.  Anyone can download the UDK and get creating.

Even better - the only way you owe Epic Games any money for licensing is if your total revenue exceeds $50,000 (US). Beyond that, developers keep 75 percent of each dollar they receive and Epic receives 25 percent.   More details on the royalty structure can be found here.

You can download the UDK right here.  No go, make the "Samaratins" demo - and make it co-op.