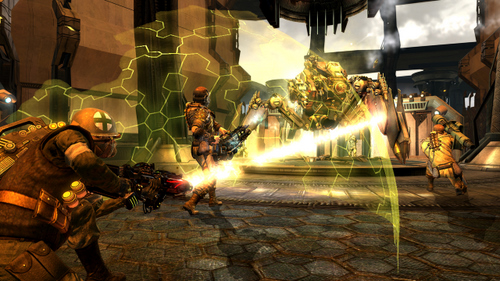 Sometimes it pains me that I have a real job.  I could be an intrepid reporter, working for MTV, living in Manahattan and playing games for a living like Stephen Totilo.  The lucky bastard recently got some hands on time with Resistance 2's co-op campaign with seven other reporters in NYC.

There were a few surprises we haven't heard about yet in the game.  While we know the 8 player co-op campaign would feature three separate classes for each player to choose and level up; we didn't know the campaign itself is pseudo-random.

Insomniac reps told me that each level of the game’s co-op mode is set on three semi-randomly selected portions of the game’s environments, pulled from the competitive multiplayer maps. The game situates the players on one of six maps. Those maps have been divided by the Insomniac team into as many as 11 zones. The game randomly chooses three of the zones for players to fight through, configuring a set of basic combat objectives and ensuring that the third zone will be tuned to be the hardest — and probably contain a big boss.

But wait...act now and you can watch not one...but two hi definition clips of Resistance 2 Co-Op in action!  How?  Simply click the Read More link!

The one thing that sticks out at me immediately after watching these is just how important the experience is in the multiplayer.  I can tell this is going to be an incredibly addictive and deep co-op experience, especially with the randomness factor.