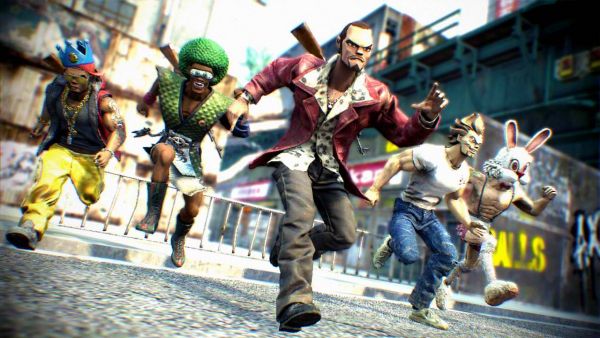 Gun Loco is cancelled? Whaaaa? How could this be?  I mean, look at the above photo.  For the sake of sanitiy, lets start with the man in the middle.  Stylized to be sure, determined, definitely.  How about the guy to his left? Okay, we have a case of Toriyama hair, but that's forgivable.  And now the gentleman with the green afro. Nope, nothing offensive here.  What about the guy with the crown?  He must be some sort of king.  I'm sure he will be portrayed with great dignity in the following video (spoiler alert: nope).  Then there's the guy with the bunny head and the suspendered diapers... oh, I give up.

This run and gun exclusive title for the Xbox 360 was dated for a 2011 release.  The game featured zany, over the top characters, and was pushed by Square-Enix as a "sprint-action-shooter"  It looks kind of like The Club, but directed by John Waters.  There was never any co-op confirmed or denied.  The Gun Loco Wikipedia entry mentions co-op, but for all you know I could have put that in there. (Don't use Wikipedia as a reference, kids, unless you're trying to be ironic.  Real sources are literally a click away.)  Check out the trailer and see what we will be missing.  Pour one out for Gun Loco.