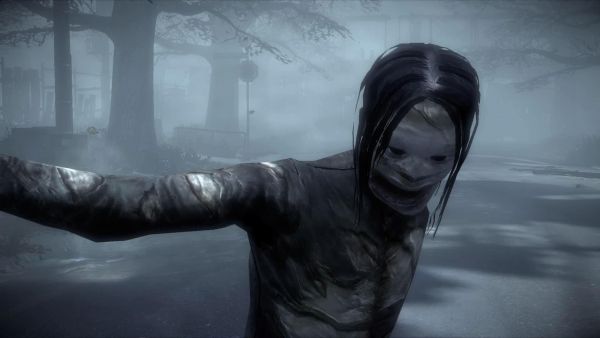 *Update* Turns out I was right to mistrust an Italian source that has been translated by a babblefish.  Konami have suggested there are no plans for a Silent Hill Multiplayer game on XBLA.  Back to playing Left 4 Dead 2 on the hardest difficulty then.

Co-op is well catered for in almost every genre from shooters to real time strategy, but what about survival horror?  Left 4 Dead has its survival moments, but how scary can a game really be when you are armed with a shotgun and cast iron skillet?  Fear not (or in this case, fear do) survival horror fans, as Konami have let slip news that a Silent Hill co-op game, based on the upcoming Downpour, may be coming to XBLA.

The news is currently strictly under the rumor umbrella as it has come from Downpour's Art Director, Radek Marek, via an Italian Xbox 360 magazine and an unholy translating babblefish.

When asked about a multiplayer aspect in Downpour, rather than outright denying it, Marek suggested that Konami are investigating a standalone Silent Hill XBLA game:

At the moment there will be no multiplayer modes in Silent Hill: Downpour, but Konami are investigating a separate chapter devoted entirely to the Multiplayer.

Sources suggest that this chapter will be download only and will be available on XBLA; no news of a PSN or PC version yet.  The concept of multiplayer does not automatically suggest co-op, but would an 8 versus 8 team deathmatch really work in the world of Silent Hill?  A more realistic multiplayer mode would be co-op survival where 4 or more players must work together to survive in a town packed full of cone wearing butchers and stitched together nurses.

If the rumors are true, Co-Optimus will be on hand to inform our community of any new information.  We may even get time to publish our "101 Ways to Survive in Silent Hill" pamphlet.

Update:  Looks like the rumor was just denied.  Chalk this up to a translation error.