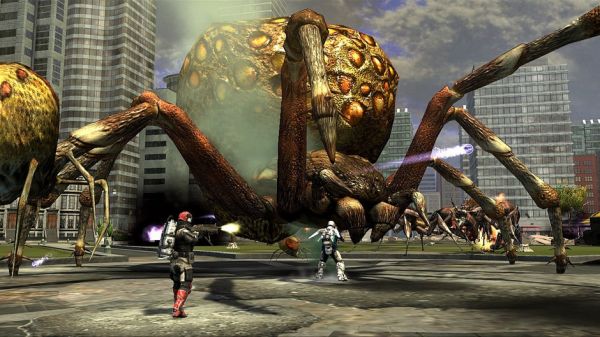 Cult classic Earth Defense Force 2017 offered replayability by having five difficulty levels accompanied by increasingly powerful loot drops.  Earth Defense Force Insect Armageddon will not only have multiple difficulty levels and rare loot; the title will also promote multiple playthroughs with a new Campaign Remix mode.  According to Siloconera, the new Remix mode will allow you to play previously beaten levels with different enemies.  Instead of giant ants you may be facing giant spiders.  The article only list insects in the remix, but if waves of Hectors (giant robots) or space ships can be substituted, this could change the game up significantly.

In other co-op news, apparently you can only play as the Trooper class in Survivor mode.  The six player co-operative mode will find players pitting themselves against waves of enemies.  Don't worry, the other classes are getting some love in the form of preorder bonuses.  Two new videos have surfaced revealing class specific weapon pack bonuses.  Gamers who shop at Best Buy will receive the "Death From Above" pack for the Jet Armor class.  Gamestop patrons will receive the "Pounds of Pain" pack for the Battle Armor class. Each pack will have some goodies for the Trooper and Tactical Armor classes as well.  Check out the videos to see some of the great weapons.  My vote for best gun name goes to the Qhrqwhqhr Banger.

EDF: Insect Armageddon will be released on July 5th.  It will be available for the Xbox 360 and PlayStation 3. The game supports 2 player split -screen co-op, 3 player online campaign co-op, and a 6 player online Survivor mode.  You can check out our hands-on preview here.