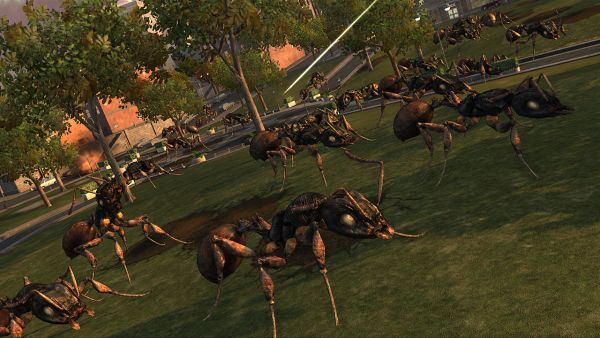 If you've never played Earth Defense Force: 2017 on the Xbox 360 - do yourself a favor and go out and pick it up - it can easily be found for $15 or less.  The original game was this campy, sci-fi, B movie style co-op action game where players tackled swarms of giant bugs, robotic aliens, and more as you protected the world from certain doom.  The game was actually a launch title on the Xbox 360 in Japan, so graphically, it left a lot to be desired - but this was also part of its charm when it hit Stateside.  The game's sequel, Earth Defense Force: Insect Armageddon is set to release on the 360 and PS3 this summer and we got some hands on time with the game at PAX East 2011.

The biggest improvement that's immediately noticeable in the sequel is the graphical fidelity.   Rich textures and lighting are a huge change from the original's almost flat feel.  The game is being powered by the Vicious 2 engine and is being developed by North Carolina based Vicious Cycle, creators of Matt Hazard.  This means that not only are the explosions as you level a city much more impressive, but the city itself is much more lively.  The cities are filled with civilians, trees and other objects, bringing just a little more life to the game world.

Another change is the way the game handles weapons and items.  While the first game revolved around a random drop system for finding new weapons, the new game uses a hybrid that involves earning experience and credits to unlock items as well as finding rare weapons from elite enemies.

The game is also adding four player armor classes to the mix adding a layer of strategy that's perfect for co-op.  In the demo I was playing as a Battle Armor class - think tank - who had the ability to pull up a shield to block damage.  My partner chose a Tactile Armor class who had the ability to drop different kinds of turrets in battle.  The other two classes I didn't get to see were the Soldier, which is a balanced type, and the Jet Armor which is the weakest class but the fastest in movement.  The latter is based on the Pale Wing character from EDF 2.  The classes are your persistent characters that you can take into co-op games - any XP and items you earn in any of the game modes counts towards your character class.

So while there's plenty of new features at play in EDF: Insect Armageddon - the game remains essentially the same - blow up everything and survive the onslaught.  Trust me, its a good thing.  The sense of scale remains as well from the first game - everything from giant alien ants to huge robots are present.  The one robot we faced, called The Hector, was a lot more agile than I remember those of the first game being.  Apparently - he was only the baby as well - the full sized robots are four times as big and he was easily as big as most of the buildings in the game.  I was also told about some of the unique and larger enemies like The Daddy Long Legger which is a huge spider like robot as well as the troop carriers that dropped in the enemies like the first game.

One intersesting mechanic the game added, almost specifically for co-op, is how you deal with the bug holes themselves.  Instead of simply shooting them till they explode, one player needs to make his way to the top of it and plant a charge in it to close it.  This means the other players will need to cover his approach to buy him time to leave the present.  This happened several times during our playthrough, with my tactical partner laying down a turret to cover our approach to the bug hole.  You'll also be happy to know there's a limited revival mechanic in the game now - allowing players to be revived up to three times during a mission.  There was much rejoicing. While I didn't get to play in any vehicles, other than a huge turret I could sit in, I was told they'd be making a return and you'd actually be able to control them!  No more crashing the helicopter immediately after acquiring it.  There's even co-op vehicles like a tank which allows multiple players to get in and man different guns.  I was told its basically "a rolling death machine."

All in all Earth Defense Force: insect Armageddon is shaping up to be exactly what it needs to be.  I was a bit worried heading in that too much has changed, but once I actually got to play, I felt right at home.  The game will support two player local split screen and three player online co-op in the campaign.  There's also an online mode for six players that's a survival/scoring mode.

Earth Defense Force: Insect Armageddon will be out on July 5th on the Xbox 360 and PlayStation 3.